In 2004, a movement began in Atlanta that has since spread around the country, and Butin has been proud of its recent role in that ongoing effort.  To support much-needed ovarian cancer research, the first “Ovarian Cycle Atlanta” fundraising event was held back then, with area participants racking up donations as they pedaled away on indoor stationary bikes.

To boost regional awareness of the annual Atlanta event, the Ovarian Cancer Research Fund Alliance – the largest global organization dedicated to advancing ovarian cancer research – in 2014 turned to Butin, a homegrown Georgia company, for its local media relations expertise, and we’ve been partners ever since. 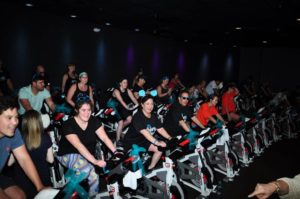 Through the agency’s keen ability to communicate the alliance’s mission, we’ve regularly generated significant exposure throughout the Atlanta region that, the OCRFA points out, has helped continually increase participation in the Georgia event and heightened awareness about the symptoms of ovarian cancer – still the deadliest of all gynecologic cancers.  There are an estimated 22,000 new cases in the U. S. annually, and approximately 15,500 women die each year of the disease.  Currently, there are no effective means of early detection, so the work to support the ovarian cancer community carries on. 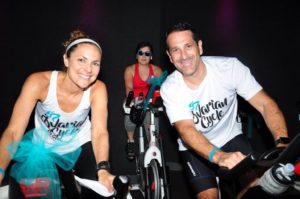 Thanks to extensive print, broadcast and online media interest, the lively 15th annual Ovarian Cycle Atlanta event in 2018 drew an unprecedented number of riders (pedaling as individuals or in teams).  All told, the participants raised more than $85,600, easily eclipsing the local fundraising goal and surpassing the amount contributed a year earlier by more than 40 percent.  For the fourth year in a row, a portion of the proceeds raised locally benefitted the OCRFA’s “Woman to Woman” support program at the Northside Hospital Cancer Institute.  Woman to Woman is a unique activity that pairs gynecologic cancer patients with cancer survivors – volunteers who have been trained to provide the patients one-on-one emotional support and mentoring.

With Butin’s help, the OCRFA says, at least $700,000 has now been raised through Ovarian Cycle for ovarian cancer research locally in Atlanta.  Meanwhile, the Ovarian Cycle event over the years has expanded to several other U.S. communities, as well.  While pedaling toward a healthier body, participants in this invigorating indoor cycling endeavor know they are raising money for vital medical research and support programs.  It’s become a popular way to do some good while feeling great, and helps bring us closer to the day women will no longer need to be worried about ovarian cancer. 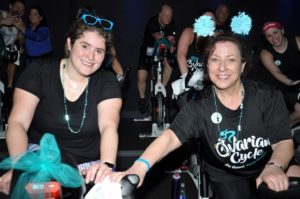